The sun dropped behind the mountains and the sky began to fill with pink like the world’s largest neon sign had broken open and was leaking these gorgeous chemicals over everything, and everything would have been perfect like the last scene in a movie, only we were speeding down the highway, trying to get to some ferry terminal we’d read about online before it was too dark to see anything.

“The site says a lot of RVs stay there,” Em told me as she drove. “And the pictures look nice.”

We’d left Parc National de la Jacques Cartier that morning, and tonight we would try to free wild camp again, this time following the advice of a site calledfreecampsites.net.

“The site says there aren’t any signs saying it’s not allowed.”

“And of course everything on the internet is true.”

“Do you have a better idea?” Em’s voice was a hot, and I pulled back, afraid to get burnt.

We’d had a great time in the National Park that morning and then in Quebec City that afternoon, but locusts of stress began to fill our bus as soon as we got on the road again. We’d missed our exit twice, and Em had driven us in circles through screeching traffic in the screaming heat while I’d cried in the passenger’s seat.

Now, I watched the St Lawrence River to our left as it carried the chemical colors from the sky back towards the Great Lakes. It was a hot night, and it seemed like it would be easy to lie still in the river and have the current take us all the way back to the little apartment that wasn’t ours anymore and the life we’d given up for a school bus.

The sun sank further, and Em was quiet and I was quiet, and both of us were aware that if the ferry terminal we were planning on sleeping at that night didn’t work out, there was no Wal-Mart fifteen minutes away. There wasn’t even a Wal-Mart an hour away, and while the coming dark would make it harder to see if the ferry terminal was safe, with our dim headlights, the dark would also make it dangerous to continue driving into the night.

I had the map on Em’s phone open and I followed the little blue arrow wishing I could freeze time or go back in time or else wishing we were having an easier time on this trip of a lifetime. I studied the red dot marking the ferry terminal, but it didn’t give me anything about whether we’d find a riverside paradise full of like-minded people on adventures towards the Atlantic or a broken-down dock full of drunken youths shouting homophobic slurs and throwing lit cigarettes at us. 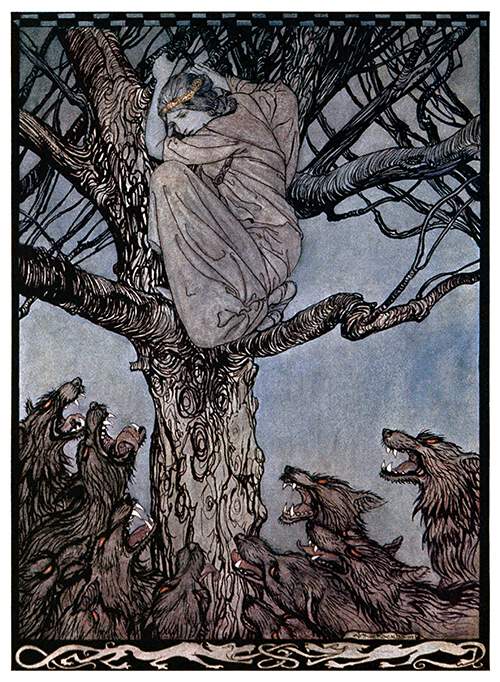 Cars drove past us with their lights on, and I pointed Em to the exit to a small town called Rivière-du-Loups. Because we weren’t freaked out about free wild camping already, we had to choose a town called River of Wolves to spend our first night.

Still, we were driving forwards because we had to. We didn’t have the budget to park at a campground or National Park every night or even every week, and so I told Em to take a left and follow the signs towards the ferry terminal.

The sky had almost completely been drained of light by now, and the last few rays were making everything look red and rich and full of secrets.

“There it is,” Em said, and she nodded towards a collection of boats still half a kilometer away.

In the last of that red light, I couldn’t tell whether the boats were haunted or sunken or full of pirates or zombies or what. The river looked black by then, and I wondered what time the wolves came out and how long it would take for them to turn our bodies into fleshy pieces of meat leaking our blood over everything.

Em drove closer with our engine at high volume and our bus seeming way too big for the little street we were driving down. We could feel wolf eyes peeking from between tree trunks and out of house windows where they’d eaten grandmothers, and then the terminal came into view again along with a pier to the side.

At first I thought what I was seeing was a wall of some kind, but in the yellow light of a dim streetlight, three white and square vehicles came into focus, RVs.

“There,” I said, pointing, and Em saw them, too. They were lined up in the pier lot with their fronts to the water like they were all allowed to be there, and we were, too.

A minute later, Em pulled into a space between an RV and a camper van. She turned off the engine and turned to me, smiling.

“This is it,” I said back, and I felt the smallest opening in my chest, a little pinprick of something, calm maybe, or else hope.

While Instagram pictures of people living in buses always seem to show spectacular views alone in nature, that first night of free camping, I couldn’t have hoped for a better place. It was me, and Em and so many others, all of us looking to see the world while getting around the respected systems of campgrounds and tourists centers and scheduled tours at reasonable times. We were a wilder variety of adventurers, spending the night as a pack at the start of the pier, all of us together, smelling the brackish waters of the St Lawrence and watching the last of the light leave the sky.

Em and I held hands and walked to the end of the pier, listening to seagulls and waves against concrete. We watched the stars come out one by one and then all at once, and once again, or maybe for the first time, I really felt that we could do this. This could be the trip that we’d been planning after all, and maybe in the end, everything would be okay.