“Do we have everything?” I asked.

“I hope so,” Em said, and both of us looked at the enormous camping packs we’d leaned against our bus. We looked at the packs, and then at the start of the 6km trail that our campsite in Cape Breton Highlands National Park was at the end of.

I don’t think there was an eerie breeze or scary music playing or anything, but maybe there should have been. It would have been good to have some sort of natural phenomenon to warn us that the woods were not a place to enter into unprepared, and that the forest would break us if we let it.

Em went to her pack first, and for a second it seemed just as likely that her Q-tip arms would snap with her hands still wrapped around the pack’s shoulder straps, as it was that she’d be able to lift the pack on her own

“Lift with the knees,” I said, and I swung my pack onto my back, only the rest of my body swung, too, twirling me across the parking lot like a ballerina with a peg leg.

“We can do this,” Em said, struggling to take her first few steps forward.

The trail was about ten inches wide and so steep it was like we were walking on tiptoes for most of it. I was pretty conscious of the fact that at any second we could trip and be dragged by our bags straight down the mountain we were hiking to the bottom of, but even with the danger, every once in a while I remembered to look up, and I saw green like the inside of a jewelry box and sunlight through the branches.

It was cool and quiet in the forest with tiny yellow mushrooms growing on the trees, and for the first time in a long time, we knew we’d be sleeping somewhere safe and somewhere we were allowed to be, even if it meant climbing 6km down a mountain to get there.

Two days before, we sat on a beach in Chetticamp, NS and realized we needed to make some big changes and fast.

It was the heat and the people making us feel like we weren’t supposed to be there and something else, too, a hangnail of a realization that we’d been trying to ignore but couldn’t anymore. And so we sat on the beach and we flipped to the back of our trip journal to finally tally up everything we’d bought up until then and acknowledge for certain what we’d suspected all along.

$531. We’d only been traveling for three weeks, and we were already $531 over the budget we’d set for ourselves.

Em and I sat on the beach in the full sun and looked out at the ocean, and the ocean looked back at us, blind and glassy, and it didn’t give a shit about us and how far we’d come and how hard we’d worked to get there.

I looked at ocean, and then I looked at Em, and I whispered something I’d been wanting to ask for weeks, but that I hadn’t been allowed to, a silent contract we’d made at the start of our trip, and how quickly I had broken it.

“Are you having a good time?” I asked.

The sweat had pasted flat the tiny hairs along her forehead, and I thought about licking them, licking her face clean the way a mother cat would, like maybe it would help somehow. I thought about pulling on her ear or holding her chin, but instead I waited, and she answered me with one word when before she had always had so much to say.

“We don’t have to do this,” I said. “We’re spending all our money, and if we’re not having a good time then why are we even doing this?”

“Then we go to Europe. We sell our bus and take the money we saved, and we go on a blow-out two-month trip through all of Europe.” 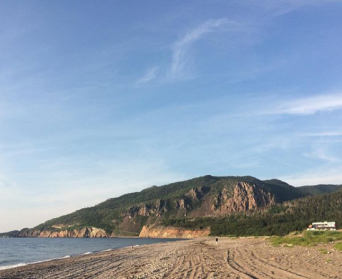 Em looked at me. I was joking maybe, but maybe I wasn’t. I wasn’t sure what was real anymore, and I was having a hard time keeping track of what mattered.

“We could have wifi and showers and a safe place to sleep every night.”

“What would we tell everyone?”

“These are our lives and if we don’t like what’s happening then we have to make a change.”

Em stood and walked back to the bus, and I followed.

“I think building this bus has taught us that we can do anything we put our minds to.”

She climbed onto the bus and I climbed on after, and we sat in the dark waiting for the other people on the beach to leave, and while we waited, we came up with a plan.

We would stop arriving at free camping spots early in the day and we would stop trying to make them feel like home. We would spend as much time as we could in national parks, and whenever we could, we’d camp in the cheaper backcountry camping spots. Sure you had to hike into them, but Em and I liked hiking, and they only cost $20 a night.

Hiking into that first camping spot was a turning point for Em and I. We were making changes, and we were making a trip we wanted to have.

It was hard work winding our way down the mountain, but we knew it was worth it, the trees without eyes to stare at us and their leaves blocking out the sun. It felt like some black ink running through our veins had been carefully blotted out. We were better now. Everything would be better now, or at least that’s what we thought until we got to our campsite and realized this might not work out as well as we’d planned…